Essential Oils, Handcrafted and Vintage Jewelry, and Other Spoils

It’s the Most Boo-tiful Time of the Year! Part 1

I love October. Yeah, there’s football and the chance for perfect weather here in Middle Tennessee. And Halloween! Which means there’s scary movies on at least a few cable channels every night. I LOVE scary movies!!! I know I could watch scary movies anytime on Netflix or by renting from Red Box or Hastings (which must be the last storefront to rent movies), but that’s not as easy as having a scary movie playing while you’re multi-tasking.  Right now, I’m writing this blog and watching The Conjuring.

I am a bit picky on my choice of scary movies. I don’t care for those that can happen in reality, like a home invasion or a crazy person killing people. Not a fan of the Hostel or Saw series, Last House on the Left, The Hills Have Eyes or Texas Chainsaw Massacre. Unfortunately, I realized this after seeing them. Oddly, I like The Uninvited, House of Wax, Orphan, and Hide and Seek.

I also don’t care for zombies. Don’t know why.

I like scary movies with plots. The original A Nightmare on Elm Street came out some time around high school or college and so began my love of scary movies. RIP and thanks, Wes Craven. Loved the Scream movies, but the plot began to get a little ridiculous further along in the series.

I like ridiculous, could never happen, even silly scary movies. Hubs makes fun of me for watching Chucky (Child’s Play) movies. I own every one of them. I think it’s some kind of weird catharsis and the safety of knowing this could never happen. Hubs told me on a gift-giving occasion that he was considering getting me a Chucky doll. I was all like, no, no, no. Haven’t you ever seen a Chucky movie? He said, well, you could throw him away. And I said, yeah, that happened in one of the movies, and he crawled out of the trash can and well, you know. He did not get me the doll. Favorite movies that fall into this category: Friday the 13th series (because Jason never dies), Halloween (because Michael never dies), Nightmare on Elm Street (because Freddy never dies), Trick r Treat (Oh My Gosh! Trick r Treat 2 is coming out soon!), Jeepers Creepers 1 and 2, Candyman, and most any vampire, werewolf or witch movie. Love the Twilight Zone TV series. Talking Tina, perhaps the forerunner of Chucky?

I tend to lump sci-fy into the never could happen category. I like most alien movies. Loved Signs, although the video of the alien walking around outside was a bit creepy and close to home. If aliens really did land, we would most likely see homemade video clips on the news inside our houses while the creatures from outer space were outside roaming around. I’ve told hubs that if I ever turn on the TV and see aliens for real, he might as well check me into an insane asylum. I know it’s arrogant, but seriously, my sense of reality would be turned upside down.

There are way too many movies to list here. I’m thinking about Ghost Ship, Poltergeist, Carrie or anything Stephen King, etc. So, do you like scary movies? Leave a comment on your faves.

And in the tradition of successful scary movie franchises, this blog will have a sequel: It’s the Most Boo-tiful Time of the Year! Part 2 will be about the horror book genre. Until next week, have fun getting your scared on. Just don’t watch alone. 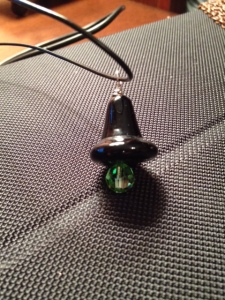 Still working on developing a stupid human trick. Three things about me: 1. I love my family, friends and dogs; 2. I'm passionate about essential oils, vintage and handcrafted jewelry, and almost anything creative; 3. The one gift God gave me was the ability to put a sentence together. So, I'm trying this blog thing. Join me at oilsandspoils on wordpress.