Essential Oils, Handcrafted and Vintage Jewelry, and Other Spoils

Focus on What You Have

Hubs and I were sitting on a bench, looking over what he calls “the table of terrors” at our veterinarian of over 15 years, in a room where we have had to make some tough decisions. On this day, the decision had already been made, and we were here to take Bailey, our 5-year-old terrier-ist home.

Less than 5 months ago, when we returned from vacation and went to retrieve Bailey and Bess from boarding them at the Hotel De Ricketts, Randy referred us to a dog ophthalmologist (yes, there is such a thing) for Bailey. He thought the lens in her right eye might have been displaced. We didn’t notice a difference, as she also had a cataract in that eye. So, we took Bailey to the dog ophthalmologist in Nashville, whose office is nicer than our house, and learned that the lens was displaced due to glaucoma in Bailey’s right eye.

Friends and family have expressed their surprise that a dog can have glaucoma. Considering that Bailey’s “sister” Bess, also a terrier-ist, was diagnosed with diabetes about 6 years ago, we were not surprised that dogs can have the same medical conditions as humans. Considering that Bailey was now our fourth special needs dog, we were not surprised at her new status. The other two have long crossed the rainbow bridge. We speculate these special needs fur babies choose us, because they know we will take care of them.

Initially, three different prescription eye drops three times a day helped to decrease the pressure in Bailey’s eye, but the last couple of times she went to the dog ophthalmologist, the pressure had increased. At our last visit, the pressure was 59. Normal pressure is under 20. The prescription eye drops were no longer working. The dog ophthalmologist explained that the elevated pressure felt like a constant migraine to Bailey. Being a tough girl, we couldn’t tell if Bailey was in pain, but we did notice that she had taken to hiding under one of the end tables and was more aggressive toward Bess.

We made the tough decision for Randy to perform an enucleation of Bailey’s right eye.  She had no vision in that eye, and it was causing her great pain. Bailey’s surgery was Friday, February 23, and I felt as nervous as if I were having the surgery. The fact that Randy has performed hundreds of these procedures successfully greatly eased my mind.

I thought about the first time I saw Bailey. Her name was Hershey, and she was one of several rescue dogs available for adoption at the Murfreesboro PetSmart one weekend in December 2012. When I saw her sticking her paw through the grate in the makeshift pen, like a cat, that was it. I knew she was ours. She reached out and touched my heart. I thought she might be a good companion to Bess, who had just lost her “sister” Pineapple, another terrier-ist (seriously, what is wrong with us?!). Bess had cat-like tendencies, too, like laying on the tops of chair and couch cushions. Bailey stole hubs’ heart, too. She whined so pitifully at night in her crate, that Jeff let her sleep on his chest. 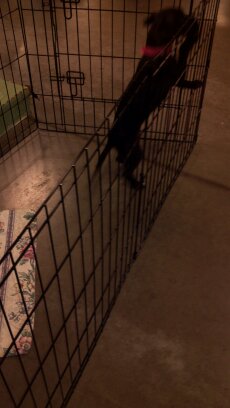 Randy kept Bailey over the weekend, and we came to pick her up the following Monday. I was worried about how she would heal, whether she would need to wear a cone for the next two weeks, and so on. Randy said she was doing great and didn’t need a cone. Randy said Bailey was doing great, didn’t need a cone, and the stitches would come out in a couple of weeks. Then, in his low, calm voice, Randy said, “When people have a problem, they focus on what they lost. Animals focus on what they have.”

I immediately wrote down what he said. Profound is not a big enough word. While Randy was easing our apprehension at how Bailey would adjust after her surgery, I thought about how applying his words, while working through a problem, might be helpful for me. I’ve since thought that further applications might include increasing gratitude and taking time to visit with loved ones, because my friends and family are the most important “what I have.”

When I was in sixth grade, I wanted to be a veterinarian. I read all those James Herriot books, starting with All Creatures Great and Small. However, when it came time to dissect an earthworm in science class, I discovered my ability to influence a fellow classmate to dissect the worm for me was greater than my ability to stomach dissecting the worm myself – thus ending veterinarian as a career choice.

During the two weeks following her surgery, Bailey no longer hid under the end table, but instead, gave more kisses and played more. She hasn’t gone after Bess yet (knock on wood), though she still voices her displeasure at sharing my office, the couch, or the bed with her. Hubs and I were headed out of town this past Thursday and dropped the girls off at the Hotel de Ricketts for a long weekend, during which time, Bailey’s stitches were to be removed. I was so excited to take them home today. Bailey is doing great, and while never a concern, she is still so sticking cute to us. 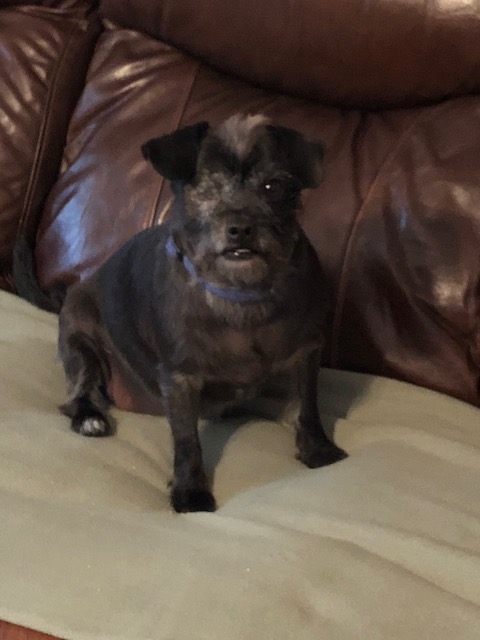 Hubs jokes we have an authentic, bona fide pirate dog. We both say we have two dogs with one good eye between them. Bess can see shadows and light, but not much else, due to cataracts caused by the diabetes. Friends and family feel badly for both girls, but we are quick to tell them that they are both doing great. They are still bark for treats and human food, run and play, love to be loved, and are their feisty selves. Bailey’s adjustment to her surgery has just been feeling better. Bess’ adjustment to losing her sight was to memorize our house, and even though Bailey may sometimes be rotten to Bess at home, she looks out for Bess when they are boarded, or so we’ve been told. Bess and Bailey are great.

They focus on what they have.

Still working on developing a stupid human trick. Three things about me: 1. I love my family, friends and dogs; 2. I'm passionate about essential oils, vintage and handcrafted jewelry, and almost anything creative; 3. The one gift God gave me was the ability to put a sentence together. So, I'm trying this blog thing. Join me at oilsandspoils on wordpress.